I KNOW THIS PLACE!


Day 3 brought us in Cape Elizabeth, heading towards Casco Bay and the Portland Headlight. We were on the road too early to pull into the park so we detoured for a new Virtual. We passed Two Lights State Park (not open either) and continued down this almost-familiar road to... hey, I know this place!


It's a little park at the end of an anonymous dirt road that leads to a lovely inlet, coastal park and Lobster shack! I remember exploring this place two decades ago, and the only thing that was new was the Virtual! 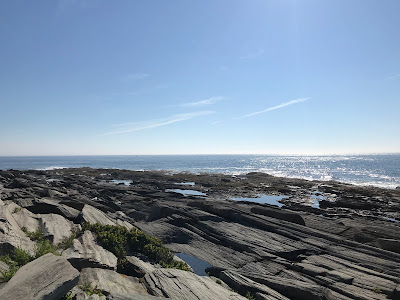 It was very slow going to the Fort Williams Park as they were preparing for the Beach to Beacon 10K, but it was worth the trip. Inside this former US Army base is one of the most picturesque lighthouses, the decommissioned Fort Williams, Goddard Mansion, and the Fort William Cache -- the oldest cache in Maine, hidden in January 2001.

I have no good photos of the auspicious cache because I was fleeing the skeeters of Hell, but we have several... er... hundred lovely photos of the lighthouse. 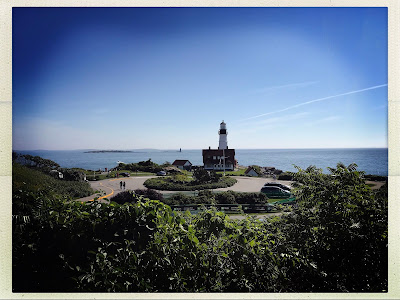 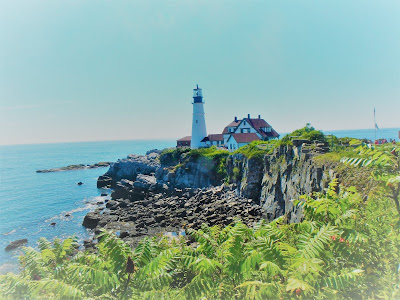 We pulled ourselves away and headed south. Last year, ShelleyJean and I explored this really neat state park south of Portsmouth. Every turn is another lovely view, and we pulled into the lot, racing dark clouds rolling in. 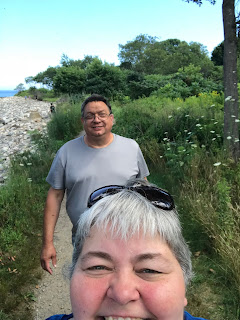 Peaceful. We sat on the bench for a good long while, watching the birds snatching fish out of the water and the sea weed rolling in on the waves. This is everything we could hope for on this trip - a little geocaching and a lot of peaceful moments.


Clouds are rolling in so we headed out. Luckily there was only a smattering of drops between here and Salem.  Unfortunately, not enough rain there to scare the tourists away. So much for peach and quiet! 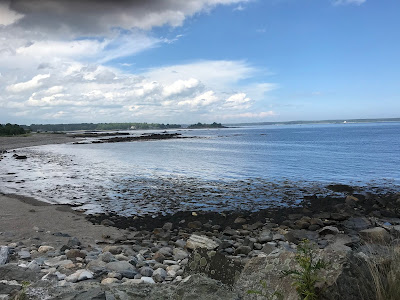 I think we predominantly visited Salem to torment TaGeez's daughter, B-Rat. It's on this 23 YO's bucket list, so we tormented her by sending picture after picture of this historic, coastal city. Witch's museums, wax museums, psychic shops - perfect! 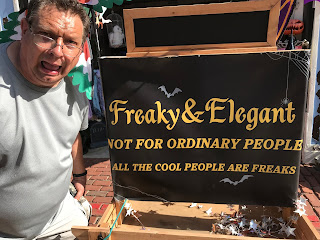 We took in many of the historic sites, but we had to stop for pictures at the newest tourist attraction - the Bewitched statue. It seems a little tenuous as an appropriate stop on the witch's tour -- a TV witch, but it's a good selfie site. 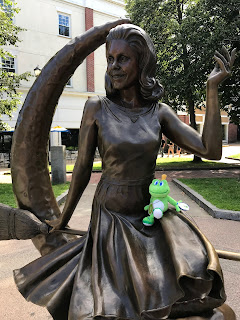 TaGeez and I walked along the the cobbled stones, where I pointed out all the historic sites I know. I love how they decorated their lampposts with ornate figureheads, again no real relation to the witchcraft scare. 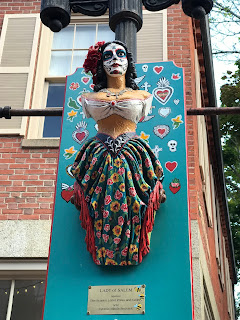 We passed through to the witchcraft memorial - a small park lined with one bench per victim. 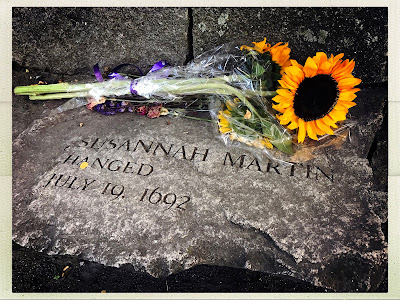 It's located next to the Burying Point, the oldest cemetery in Salem and final resting of many notables... 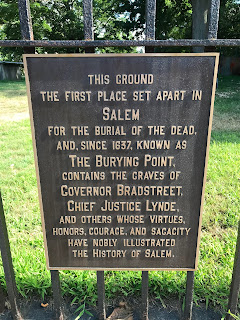 ...including Judge John Hathorne, grandfather of Nathaniel Hawthorne, known as the "hanging judge" during the witchcraft trials. 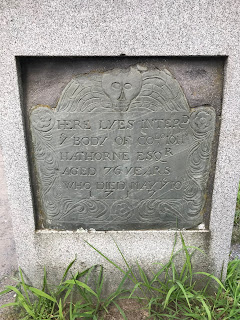 The heat of the day became overwhelming so we packed it in for the relief of the car AC.  Two more stops before moving onto our hotel in Waltham - two stops that were a world apart.


Was there a Doctor Who episode set in Olde Salem? I guess I should look it up. This site was a two-fer: a traditional and a Virtual.

And then the new Virtual off Pope Street. In 2016, Salem State researchers discovered the site where the 19 innocent people were executed. In memory, a small park was created in July of 2017. Tightly surrounded by residential homes, it's hard to believe this little plot of land laid forgotten for 325 years while locals walked passed and lived their lives unknowingly.


Extreme beauty and jarring reality all in one day - very emotional. Feeling the urge for loud music and good food, we detoured to the Border Cafe in Burlington for Louisiana/Texas food before turning into Waltham for the night.

Up to now, we've evaded the real rain, but that was coming in the morning.