Western Michigan Adventure with a Kriket, an Indian Chief, Big Red, and a Webcam

There are fabulous people that just enrich our lives.  Have I mentioned my sister, WikidKriket, before?  Or my birthday adventure? 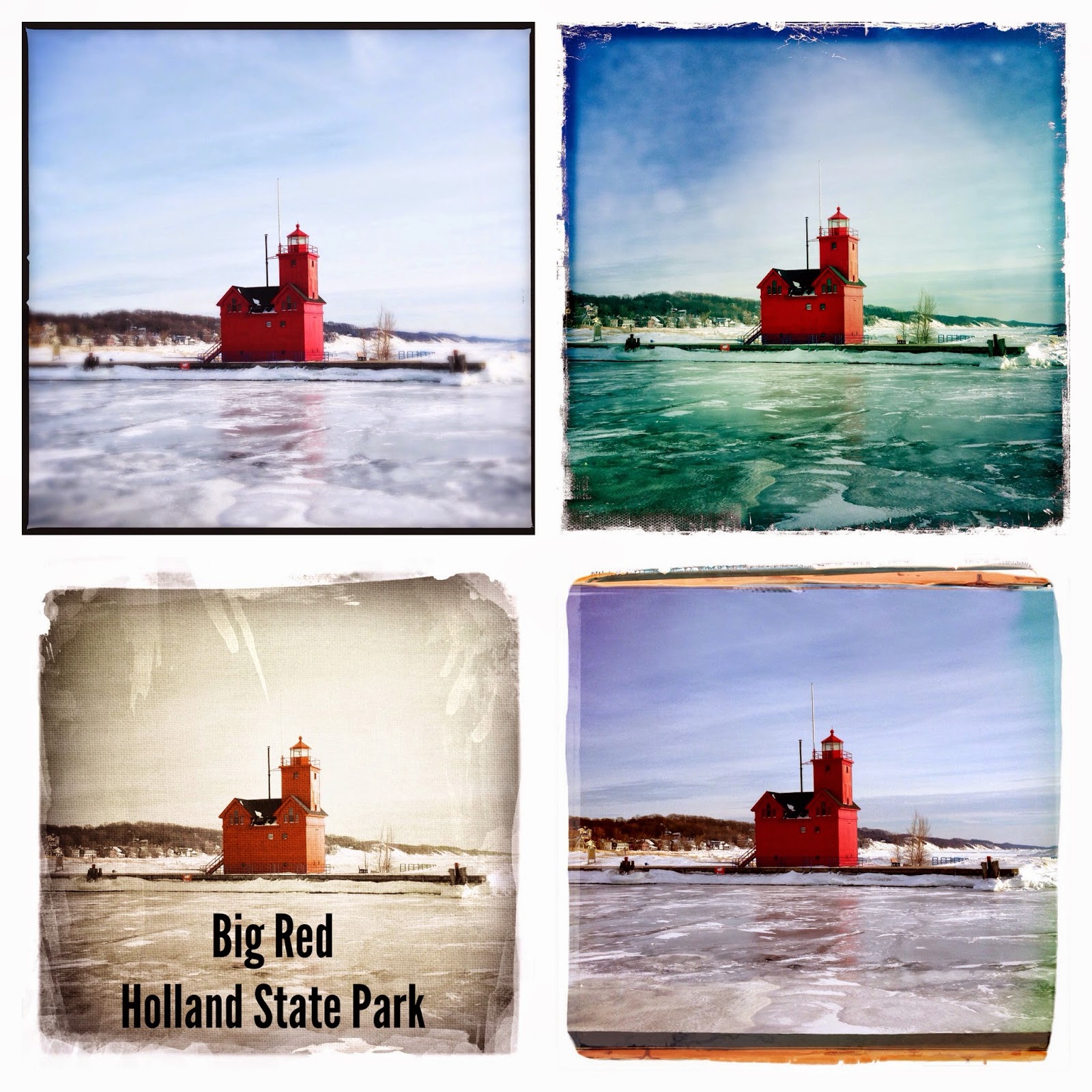 Every year we take each other’s birthdays off for an adventure.  We’ve done this for years.  We’ve toured Meadowbrook, visited the Edsel and Eleanor Ford house, taken a skyscraper tour, explored the Guardian Building, walked the Belle Isle Aquarium, seen Potted Potter in the 2nd City Theater.  Can’t forget the Richard Avedon exhibit – which turned out neither of us wanted to go to but both were greatly affected by it.  Let’s not forget the amazing meals at Slow’s BBQ, Small Plates, Good Girls go to Paris Crepes, Green Dot Stables and Zehnder’s.  This doesn’t touch half the amazing experiences we’ve had.

This year is a little different.  When Lorna asked what I wanted to do for my birthday, my answer was, “Go for a ride.  Anywhere.”  I have cabin fever, and I needed to see old roads and new experiences.  Boy, did she come through!

On Monday morning, the Lime Squeeze (geo-mobile) pulled into my driveway.  With a twinkle in her eye and a plot… er… plan in her head, my sister sat with her Sphinx-like smile and was silent about today’s plans.  This all occurred after several hours of taunting texts from my brother-in-law about ‘I know where you’re going!’ With the car in drive, we headed WEST! After a short visit and a 2-hour drive, we found ourselves in Kalamazoo! 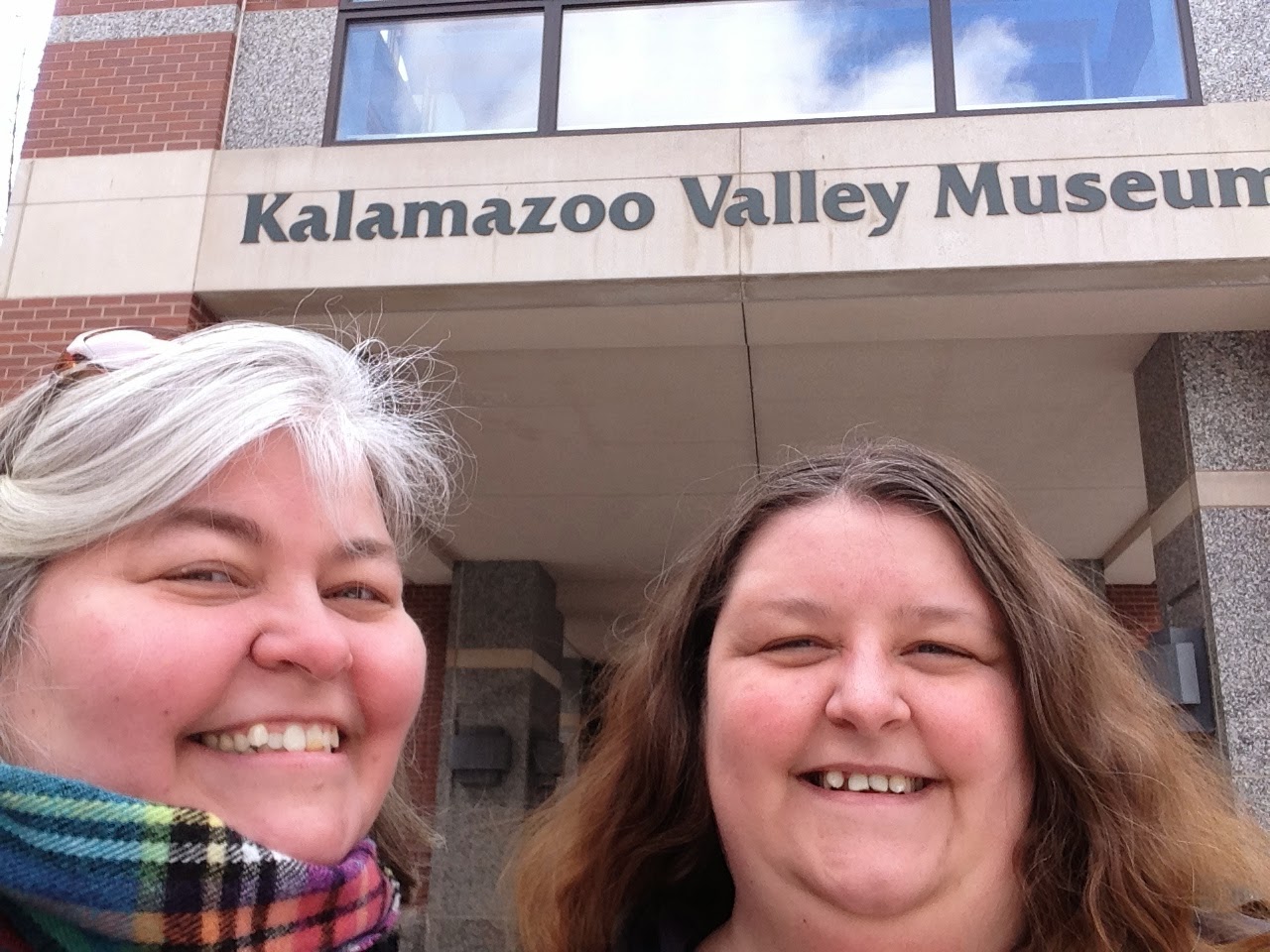 Our first stop was the fabulous Kalamazoo Valley Museum – first class exhibits packed into a small museum.  As this is my geocaching blog, if you want to read more about this museum, click the link for my museum blog post.  Let’s just say we tried every experience and managed not to get thrown out! 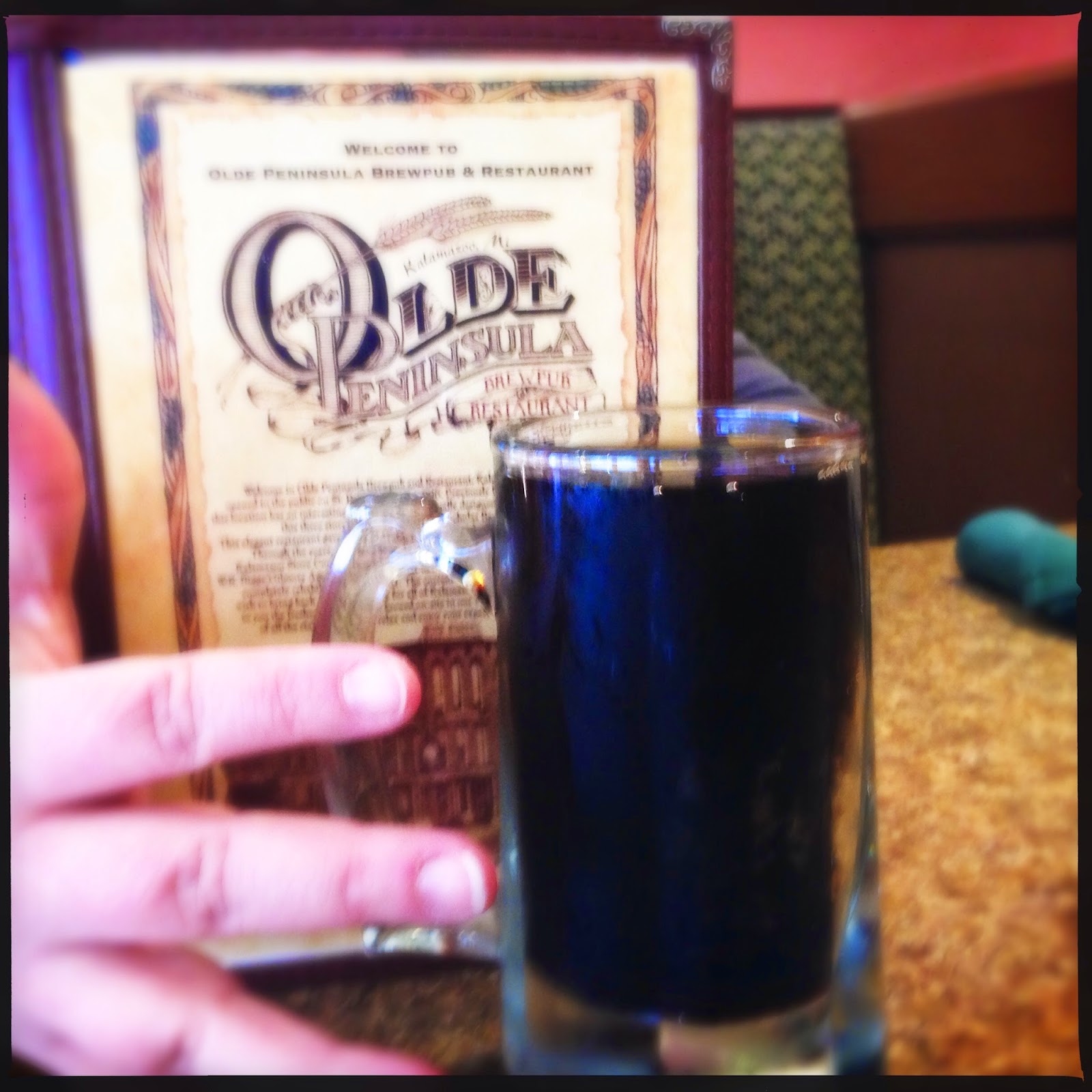 After lunch (and a cache, of course) at the wonderful Old Peninsula Brewpub & Restaurant (yum!  Still craving that burger, the beer battered fries, the house root beer), Kriket asked, “What do you want to do next?”  Ride, baby!  I want to see the sites!  We are so close to Lake Michigan and we were experiencing a very rare, very blue, sunny day.  After dealing with -10° sleet-filled days, this sunny 25° Monday was considered balmy!

First stop, Chief Noonday’s Grave (a Virtual).  This was a memorial on a stick in the middle of farmland.  We missed it at first, and Kriket did a most excellent u-turn.  The first step out of the geo-mobile landed me into knee-deep snow, and it was tiring tromping over to the marker.  We had a bit of problems answering the verification question – it was then I noticed the edges of a low headstone poking out of the deep white.  After clearing with a snow brush, with answers in hand, we were on our way. 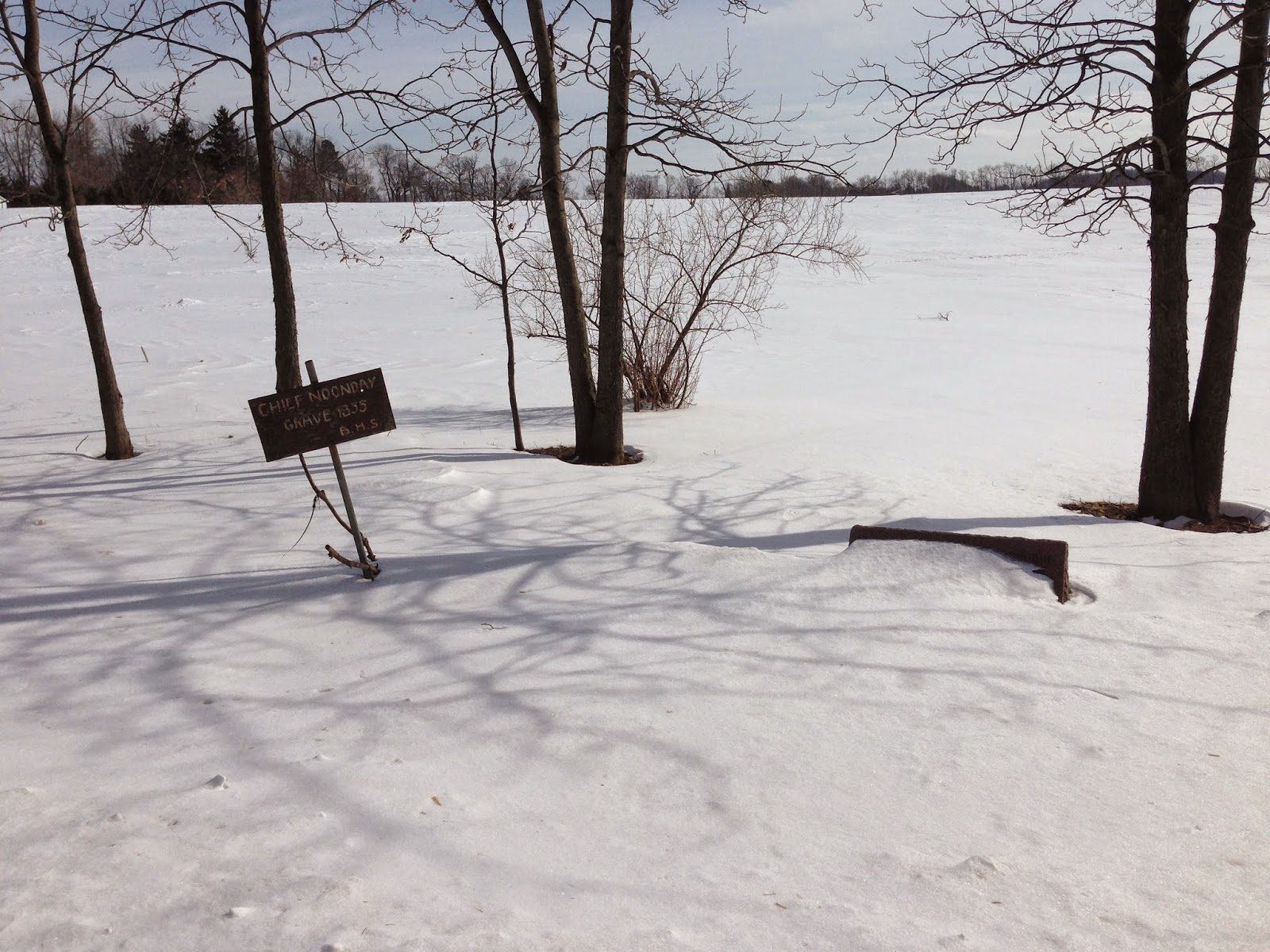 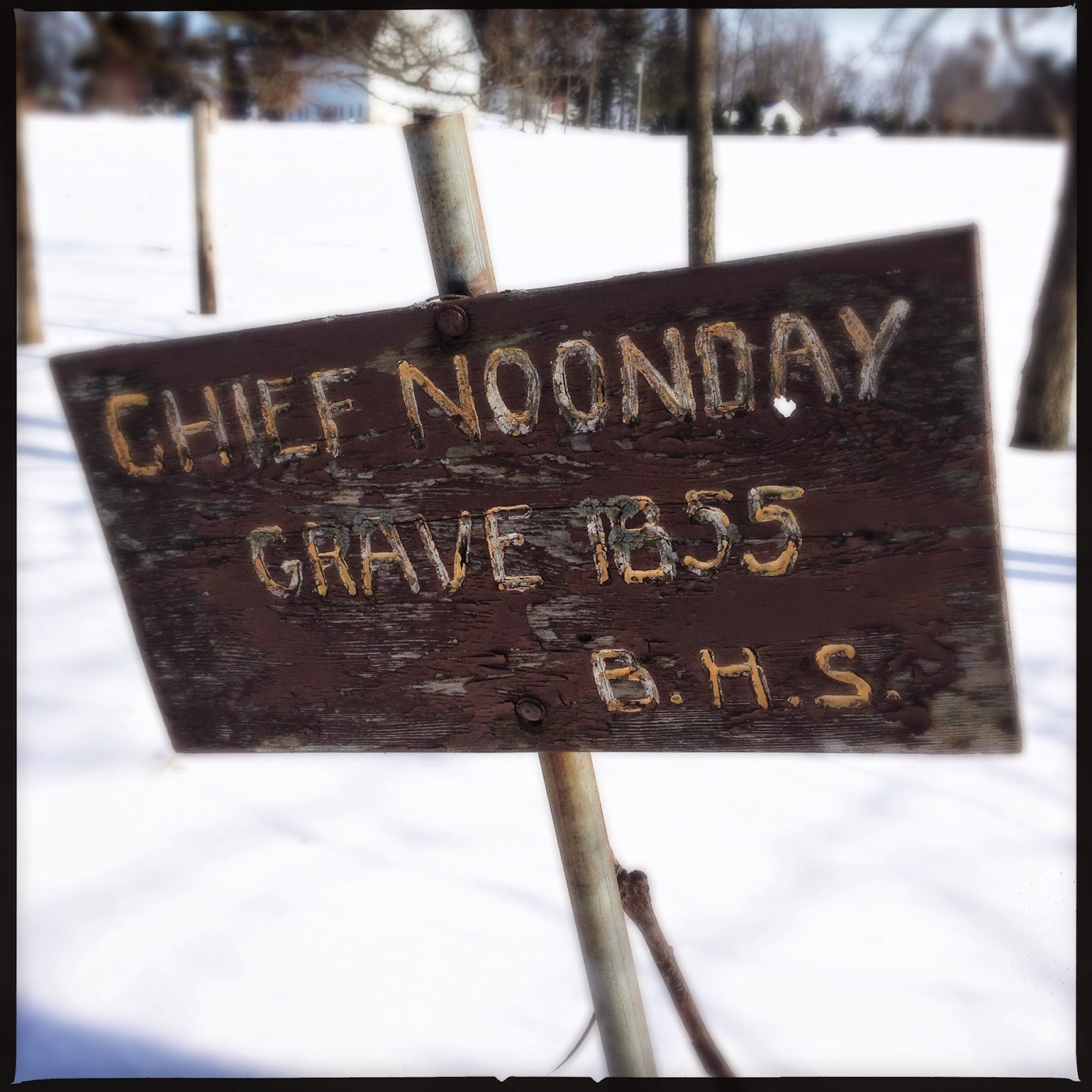 BEAUTIFUL rolling hills through horse country.  Pristine red barns framed with pure white snow behind large, white horse fences.  Painted ladies and hundred year-old farmhouses.  Brownstone shoppes flanking the Kalamazoo River and old railroad bridges.  A plow truck plowing through a sedan’s front end.  It was fascinating.  And all through this, Kriket would stop periodically so I could grab a quick cache in the various Western Michigan counties.

Our next stop was AMAZING!  We visited “Big Red”, a lighthouse (and Virtual) in Holland State Park.  Oh, this is what adventures are made of. 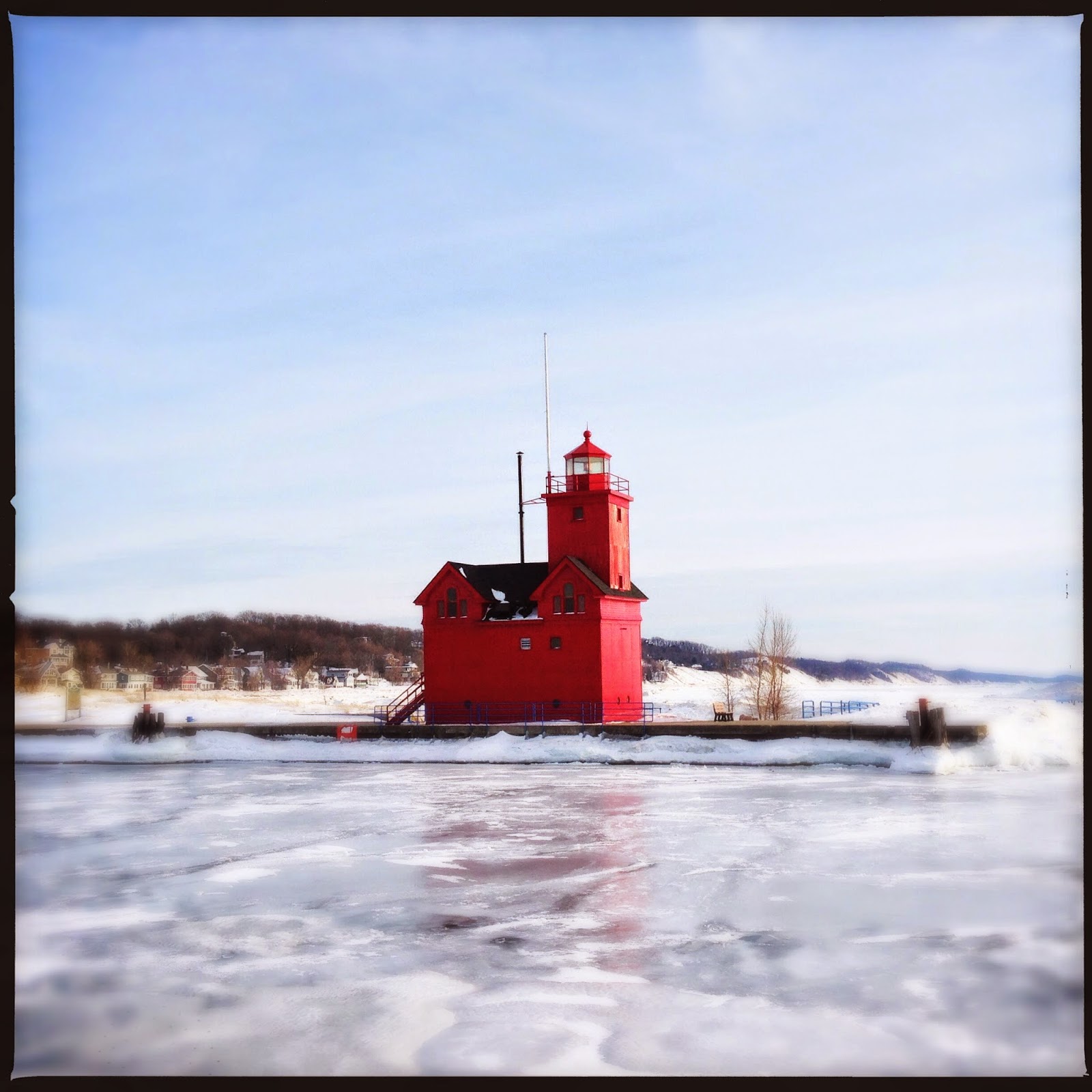 Big Red sits on the mouth of an inlet.  It is guarded by two piers, one on each side of the inlet.  These piers reach out into the lake and end with two smaller lights.  The bay was frozen over and the ice went out for miles.  It was fascinating.


A beautiful lighthouse keeping watch over the frozen Lake Michigan.  And there were so many people out there!  Walking along the frozen “pier” (which was just massive ice mounds), climbing up and jumping from massive ice buckles, taking pictures.


All too soon, though, the light was diminishing so back to the car we went.

One final stop.  I haven’t mentioned the other reason for this big day.

Monday was the 3rd anniversary of my cache-a-day streak!

Every day (starting on March 2nd, 2012 during another birthday adventure with Lorna) for 1,095 days I’ve headed out in all sorts of Michigan weather (100°+ to -26°F) to grab a cache.  I’ve found caches in Illinois, Indiana, Ohio, Pennsylvania, Maine, Michigan, and Ontario.  I’ve found over a 1,000 puzzles and over a 100 Virtuals.  According to my companion trackable, if I went cache to cache as the crow flies, I would’ve traveled around 31,475 miles!  So, on this big day… my birthday and my milestone day…. We needed to end with a special cache.

Just after 7 pm, with the sun just a memory and the temperatures dropping, we headed over to Grand Rapids for School Spirit, one of only three webcams left in Michigan.  Forever the good sport, Kriket followed me to the center of campus (and what felt like miles from parking) to stand in a lonely common, covered in snow, to have our (lousy) picture taken by the webcam.  We moved around to get several pictures, snapped every 60 seconds, to make sure we had at least one in some semblance of light. 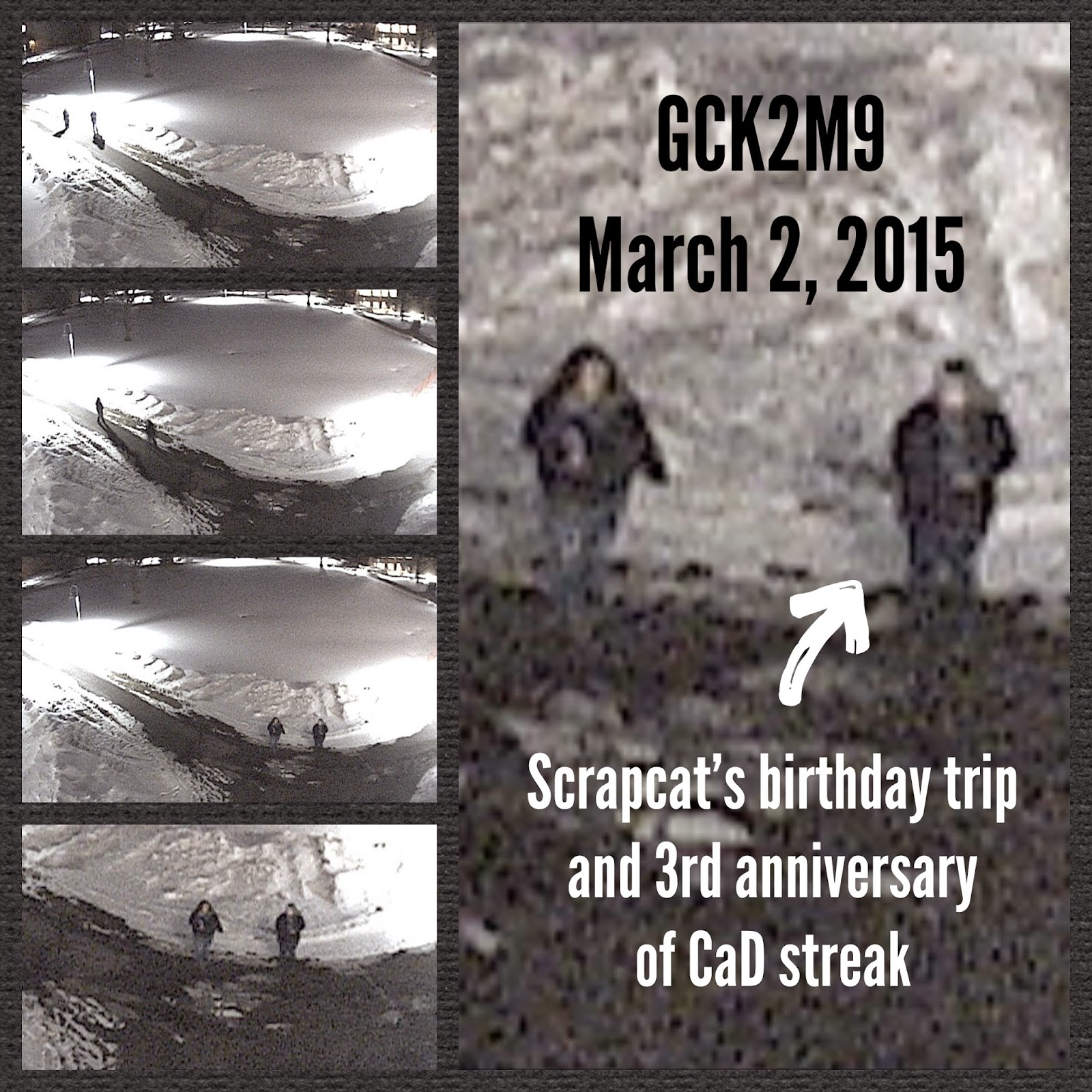 After our victory pose, a quick nosh at Chipotle, we headed home from our adventure – 14 hours, 400 miles, and only 6 caches later.  TaGeez was waiting to hear about our adventures – with flowers, an ice cream cake, and his famous sausage rolls.