“Alcatraz… It’s more than just a prison!”  - This cracked me up! It was the tagline to the video played on the Alcatraz ferry during my trip to “The Rock”.

In town from Detroit for work, our team was surprised at the last minute with Alcatraz tickets. Alcatraz had been taunting me all week - everywhere we went it was looming out into the water. When we checked we had been told the tickerts were sold out for months!  OOH! Bucket list item! But we were unsure if the tickets were to access Alcatraz or just circle the island and the bay.


Dreams of completing the famed Escape from Alcatraz Virtual were dancing in my head as we crossed the beautiful, breezy San Francisco Bay. Behold! Land ho! And we were walking off the ferry towards a wonderful new adventure on the Island. 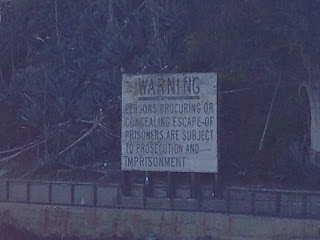 Due to a glitch, I was able to take an earlier ferry than my coworkers – sweet! Although very tolerant, as they weren’t geocachers, I don't think they understand my obsession. I love history – I love puzzles – I love Virtuals – I love taking pictures, and I was determined to earn my Alcatraz certificate. Friends back home appreciated my level of determination as they know I have a paralyzing fear of boats, but I crossed both ways with no problem (and even enjoyed myself). 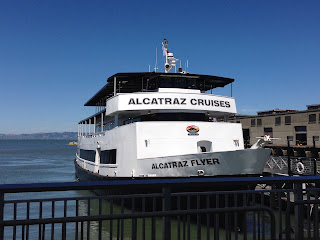 The Virtual Geocache is a 12-part + 9 bonus question adventure. The first 9 parts involved gathering clues from the cell blocks and the final 3 were basically onsite puzzles using answers from the first 9 parts. You can do the Virtual while doing the included audio tour (don’t miss the audio tour – riveting - really well worth the time. The audio tour did an amazing job detailing the history and the escapes of Alcatraz); the Virtual takes you practically in the same order as the audio tour. From start to finish, doing the Virtual plus the audio tour and stopping to take many, many pictures, I did it in 2.5 hours. I could’ve rushed it if I had to, but I’m glad I was able to enjoy the entire experience at my own pace.

Observations from the tour:
1. Alcatraz was much smaller than I expected – I can’t imagine being confined there. The cells were so small, and, according to the history, absolutely stank because the toilets were flushed with salt water.  Following along the tour, listening to the tales of desperate men risking their lives to escape "The Rock", this was particularly timely with all the news reports of the escaped prisoners in New York right now.  However, after traversing the bay in "relatively calm waters", I can't imagine how any of them thought they could make it.  The currents are dangerously strong, the wind a true force, and the distance great. 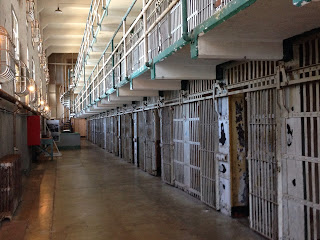 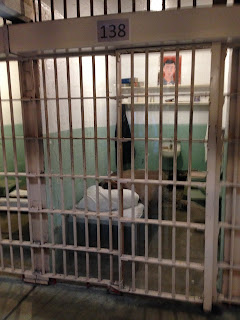 2. The step out into the recreation yard was the most shocking for me – to be a prisoner and see that stunning view of the bridge and then to step down into reality, the recreation yard, with its high walls and gritty landscape. The audio tour said that prisoners could hear snippets of sounds from the outside world, and that it was particularly bad on New Year's Day. Audio and visual torture.


3. The view from all sides of the island was breathtaking, though. Each time I rounded a corner I gasped – each view more beautiful than the last. I took many pictures of the bridges and the SF skyline. I could've sat there for hours. 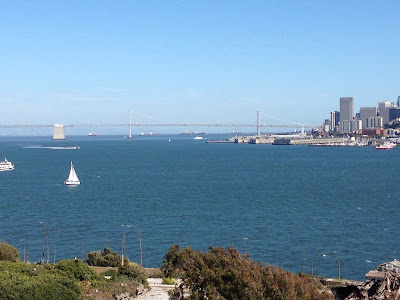 4. Although not a bird person, I was amazed at all the different types. It was my first time seeing a pelican outside a zoo. Plus the seagulls, egrets, crows... With the cawing of the birds and the crashing of the waves, it was quite noisy at times. 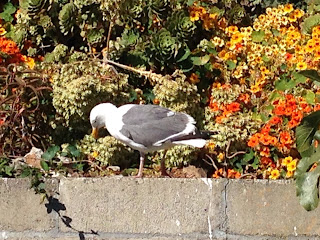 5. I hope to come back one day to re-do the audio tour and really explore the Island. Regrettably, I ran out of time to do the nearby Earth cache. Instead, I stopped to enjoy the beautiful prison gardens encircling the cell house. 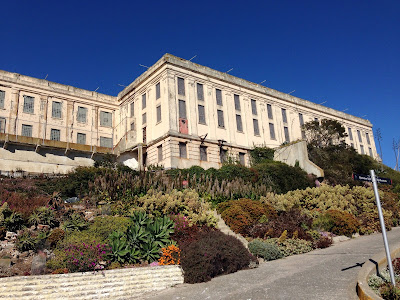 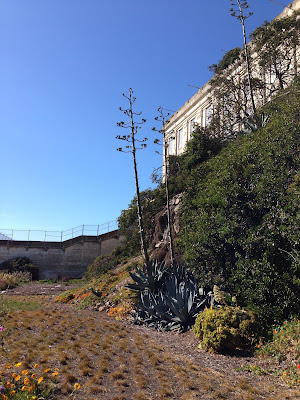 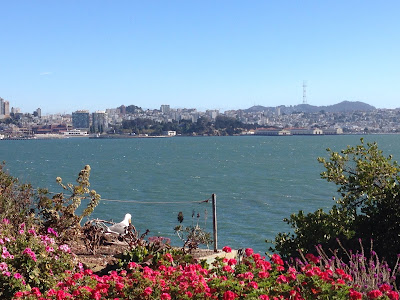 Definitely a "favorited" cache (apparently 400 other geocachers agree with me!).  I had difficulty with 2 of my questions (due to erosion and renovations), but the Rangers at the Park Services stations were very helpful.  With great anticipation I sent my answers to the CO who emailed me my personalized certificate that night. 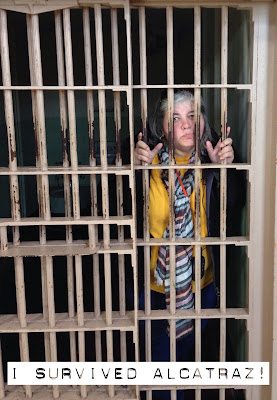 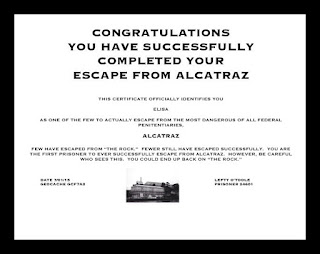 Thank you, jbond, for the California Gold (smiley) and my certificate!  This National Park is an amazing stop, and I hope to return one day with TaGeez to spend even more time here.  Definitely more than just a prison!
Posted by Elisa (AKA scrapcat) at 6:26 PM