Stepping Out in San Francisco - I

Finally, a chance to tell you a little about my adventures walking around town.  TaGeez said it was unfair to pack five days of photos in one post so I'm splitting it up in two.

As I mentioned, I went to San Francisco for work - a trade show at the Moscone Center.  I had no idea how much free time I might have so I planned for everything with the expectation of nothing.  Luckily, each day I was dismissed for a few hours and found myself wandering these pedestrian-friendly streets.

In total, I "found" 8 Virtuals* including Escape from Alcatraz on my final day, 7 Traditionals, 1 puzzle and 1 webcam.... in one of the most beautiful cities of the world!  I feel lucky that I can share with you some of the highlights and the beautiful areas they appear in. *Note: I've specially cropped all the Virtuals so as not to give away any spoilers.

Each day started me off stepping out of the Marriott Marquis and into the Yerba Buena Gardens - the Moscone Center was just one block south. 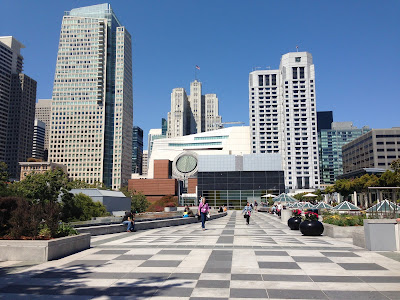 As such, I would pass this fellow every day, at least twice a day.  Meet the Shakin' Man!  He was a local favorite.  It seemed like each time I passed someone was taking their picture with him.  One day I watch as a homeless man held an entire conversation with him.  And, for the Gay Pride Parade, he was decked out in red flowers!

After setting up at the convention center, we broke for the night. YES! If I hurried, I could make it to the nearby California Gold Rush Museum. With 15 minutes to spare, I rushed in with my baggies of trackables from Michigan.  The staff knew what I was there for and played a game of "Hot and Cold" with me until I found the cache concealed by a patron's long skirt.

Opening it up, it's full!  So, being the generous heart I am, I swapped my several dozen for it's two dozen and met some fellow convention-goers (and cachers) in the interim!  This was my first California cache, and I earned my souvenir! 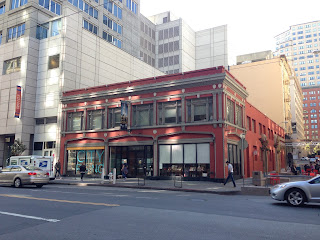 So, it's Five o'clock, my coworkers are at happy hour, and I'm not feeling the time change (yet).  What to do?  Fisherman's Wharf, of course!  Now I told you about my webcam experience here, but the wharf (especially Pier 39) offered so much more! Sea lions barking.  Souvenir shops and street performers and a merry-go-round. 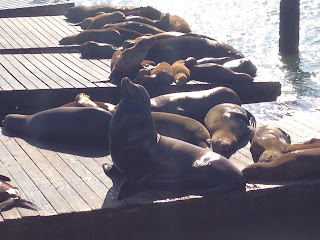 And beautiful views wherever you turn. 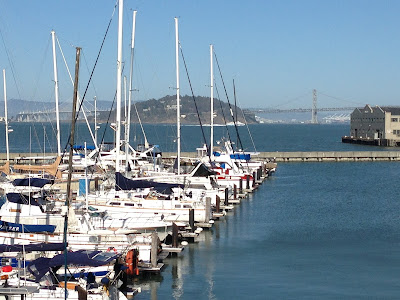 Before succumbing to dinner at Bubba Gump's (9pm PST = 12am EST) and then a well-earned rest, I did mosey over to visit Laughing Sal on Pier 45. At this moment, Sal is the recipient of 453 Favorite points! 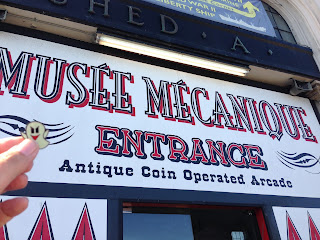 Morning broke, and that left me with a question.  Do I go out and grab a cache before the conference or do I hope I will have time after today's events to find one? Luckily, I was still on Michigan-time so I moseyed out of the hotel at 6am for a cache across the street... 59 feet from the front door!

Fox's Hardware is a fixture in Frisco with some very interesting murals and well-known window-displays.  I enjoyed my excursion to the cache under the watchful eye of the Marquis' doorman. 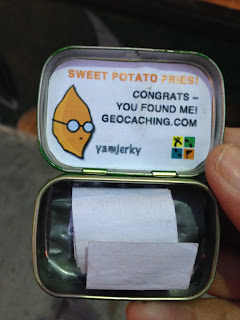 As luck would have it, I found myself free Friday afternoon for a few hours.  Now, the smart convention-goers went back to their rooms to rest before the big opening that evening.  I, however, was loose in a new city so all common-sense went right out of my head.  Upon reflection, I would definitely do it again!

With the exception of the Alcatraz excursion, this was the best day of sightseeing downtown San Francisco.


My wanderings took me to this fabulous puzzle called Bamboo Alley.  The CO reinterpreted several local landmarks in a small area in watercolor (this is my rendition using an iPhone app below).  You had to follow the images to the final cache location.  THIS IS WHY I GEOCACHE! Following these caches I saw so many works of art, tucked-away plazas, snippets of history that no tour book would show me!

Ah, One Bush Plaza. Let me set the scene for you.  I'm in San Francisco. During the Gay Pride weekend. And the historic Supreme Court decision to legalize gay marriage was announced just a few hours earlier. There was literally dancing in the streets. And this plaza, just off Market Street (the scene of the pending parade) was filled with merrymakers and tourists and businessmen on scooters. Personal note: I still cannot get over the constant throngs of pedestrians everywhere!

As I approached this statue to claim another virtual, I was approached by a petitioner who was advocating Gay equality in the workplace.  I didn't mean to chuckle at him.  I told him I'm from out of town and it's a non-issue where I'm from. I live in Ferndale, Michigan, where, among my non-geocaching friends, I'm pretty much the only straight one around. But I applauded his passion.  I thought it was fitting that he was working his petition under a statue celebrating the working man.

DON'T FORGET TO LOOK DOWN! One of the biggest mistakes in visiting any city... Detroit, Austin, Chicago, Portland... is people forget to look up or look down.  I spotted this within a few feet of the Working Downtown statue.  How many people a day do you think pass this?

What's fascinating to me is that I snapped this photo without understanding it's significance.  Once I returned home, a friend of mine told me the history of San Francisco.  Did you know that much of it is built on top of wrecked or abandoned ships?  I looked it up.  Many ships were abandoned in the port of San Francisco by crews who sought their fortunes in the Gold Rush. How cool is that? 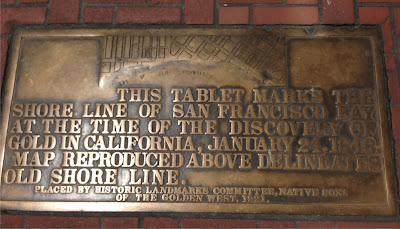 My last stop (for this post but not for the day) falls into the category of "This is not what I was expecting". All I knew from the cache description is that I had to walk over one block and up one block and around several office buildings to something tucked into (possibly) a plaza (or is it?) on the East side.... Well.  Who knew?

Stop back tomorrow as I continue my walk to the Embarcadero along San Francisco Bay and other beautiful places!