Saturday rolls around, and I was in a quandary.  I wanted to go to the WEC (Windsor, Essex County) Event GC5K4AR, but three sets of travel companions cancelled on me.  I was contemplating going alone when TaGeez suggested I message AstroEricJ.  Eric had posted he planned to ice walk several nearby island caches and had asked if anyone wanted to join him before the meet.  It wasn’t too long until he was on my street (OOPS! I gave him the wrong house number but thankfully had included a photo of the exterior), and we were making the 9-mile drive to the Detroit-Windsor border.

The WEC event is a monthly, moving event.  This one happened to be in Windsor at Franco’s Pizzeria on Tecumseh Street.  Hosted by first-time host, jkbailey, it was a fabulous excuse to go on an adventure!  First stop, on the way to the event, was a nearby cemetery SQ – Tread Lightly GC5DM0A. 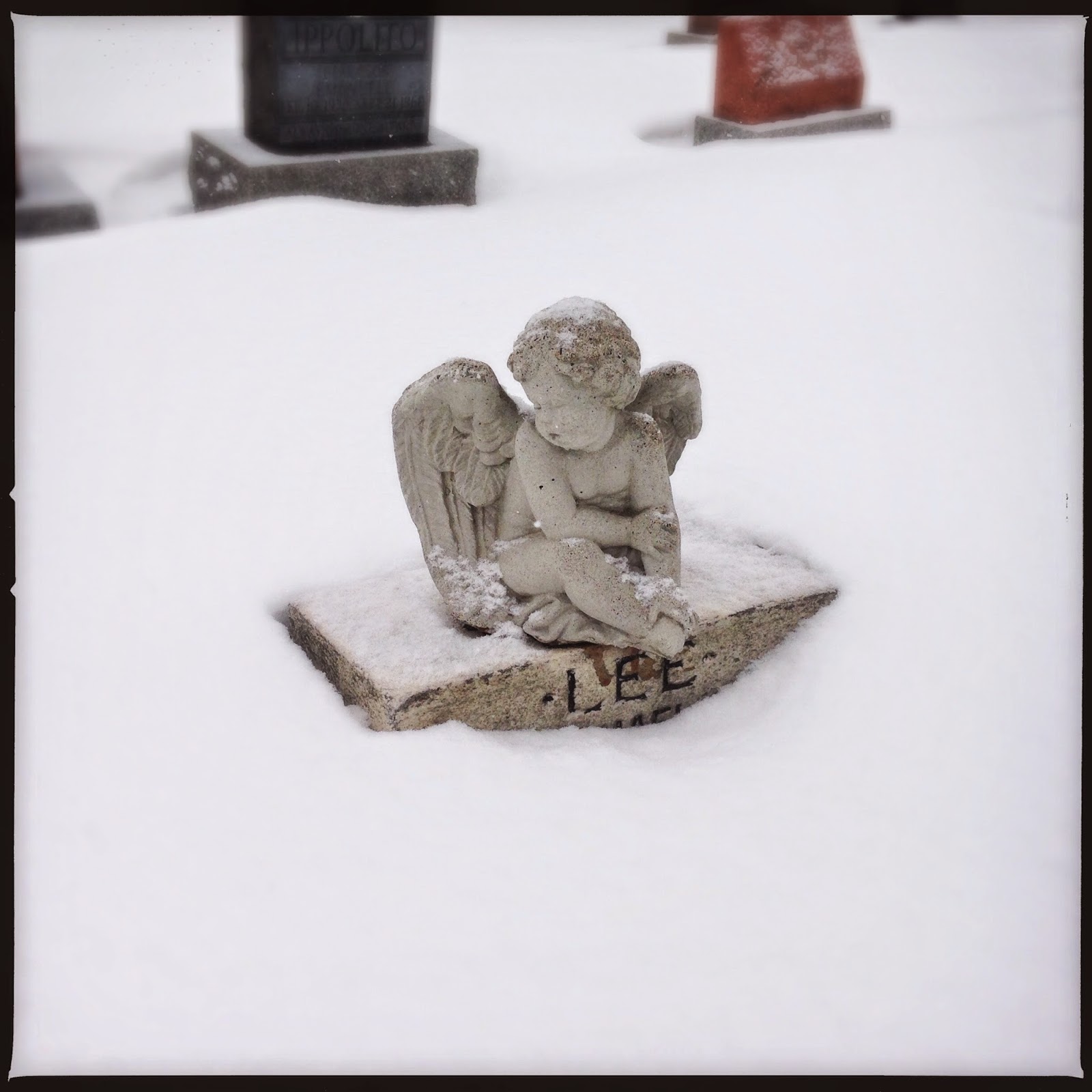 About this time we were running behind so off to Franco’s for warmth, friendship and laughter!  Great turnout of Americans.  We ran into Trustworthy (Mr., Mrs, and Gucci), Team Gates, Alona Spiegel, the Frito Bandito, RayQix, PaRaDiZ, and Kachehuntr.


All the food looked good.  I regret I didn’t try the salad bar (Mrs. Trustworthy’s salad dressing was like catnip to me).  However, my cheese & pepperoni pizza was Heavenly.  We introduced ourselves to our Canadian counterparts, discovered Trackables, and chatting the afternoon away. 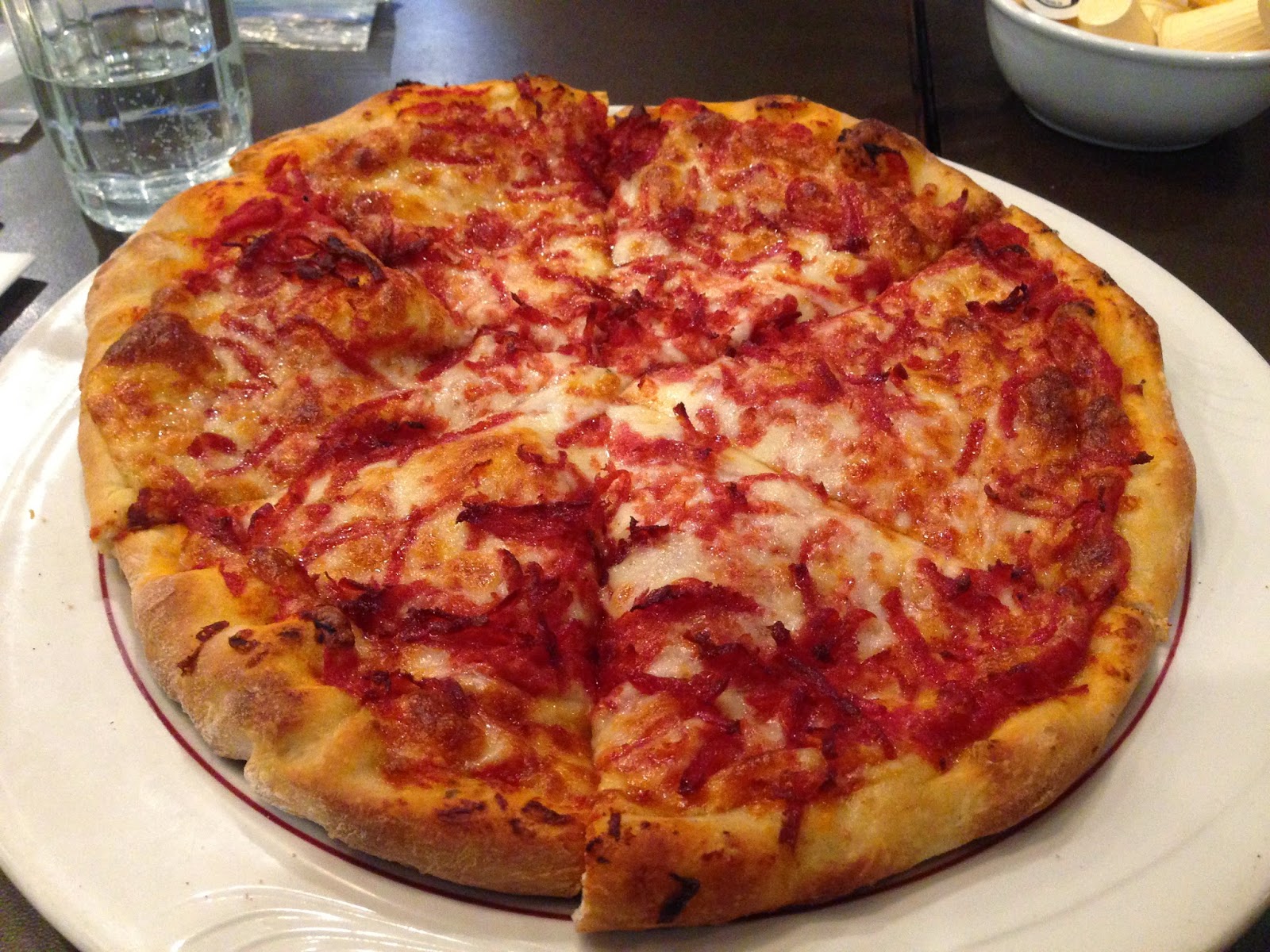 To top it off, many of us were lucky enough to win door prizes.  This is mine – I’ve named him Windsor TB6RRMG.  He’ll return to Canada this spring with the mission of exploring Canada’s 10 provinces and 3 territories plus neighboring Alaska. 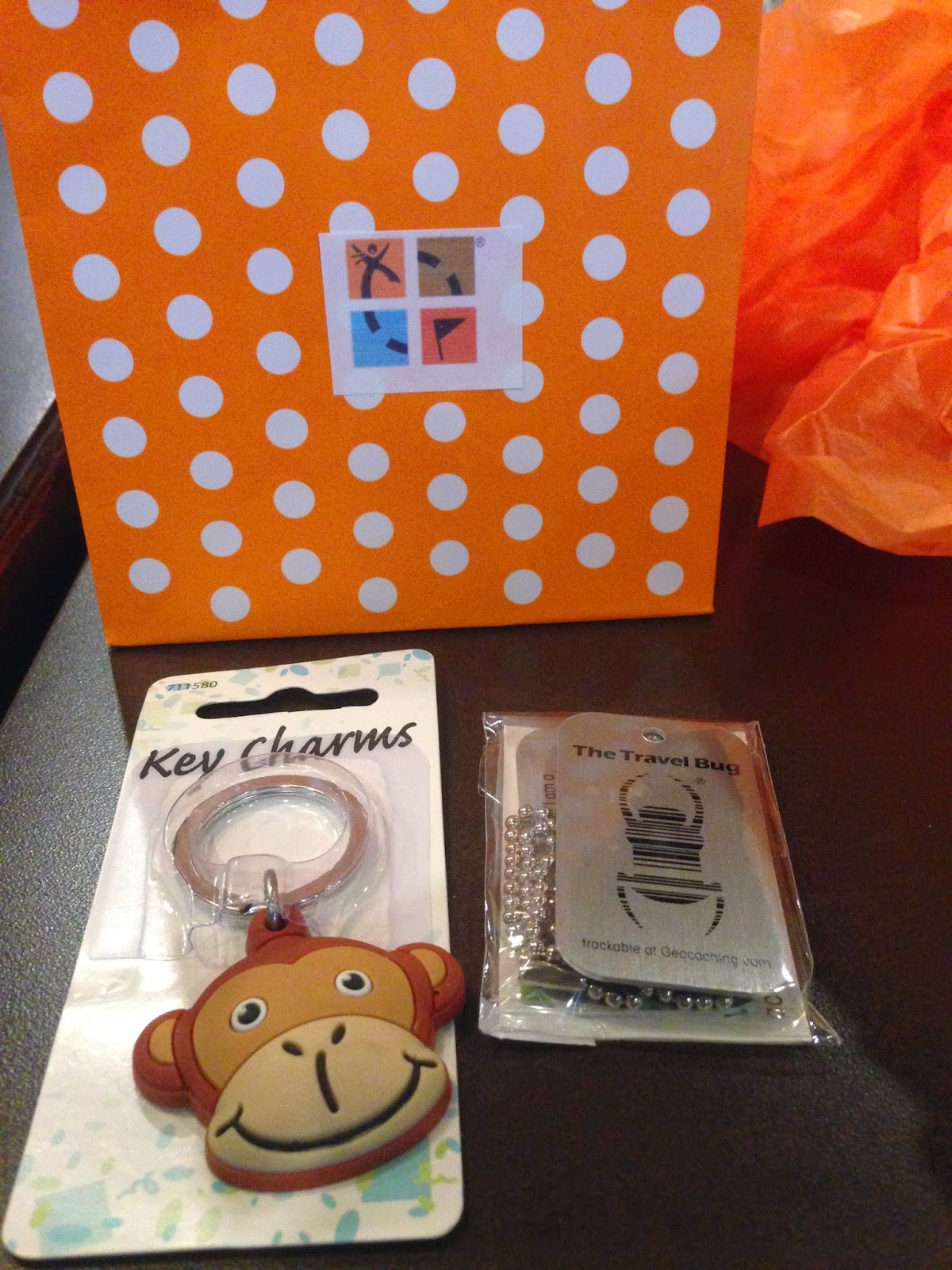 Afterwards, Eric, Gates, Alona and I grabbed the newest caches that published in the parking lot, and then headed East.  Eric is excellent company. He had a good knowledge of Detroit history, Canada’s views on the new bridge, and the new Windsor construction.  I really enjoyed talking about oldie caches we had found and future trips planned.  I just regret that TaGeez hadn’t been free to join us – I miss my bear. 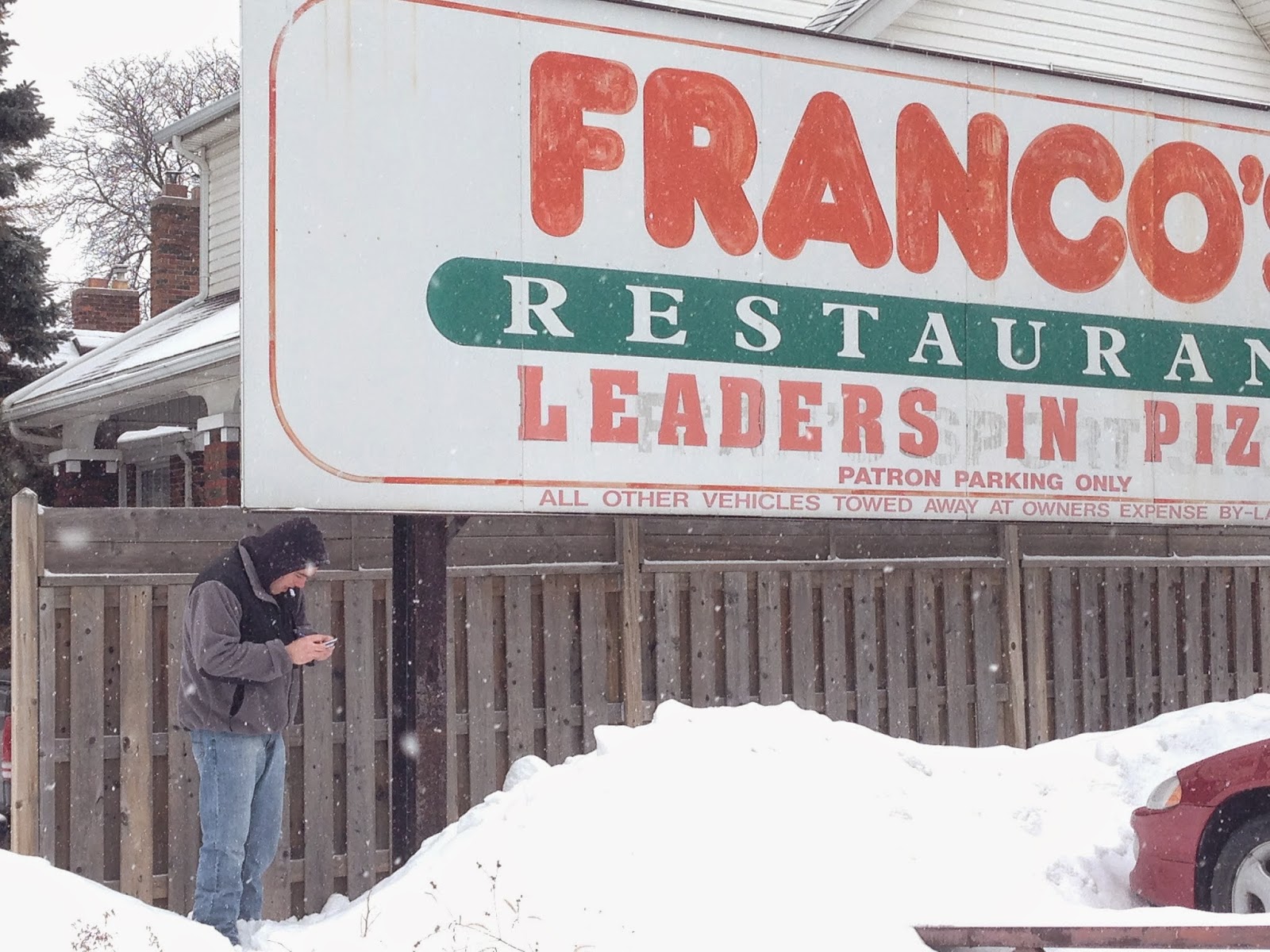 Several months ago I had posted on Facebook about this cache (3% GC8BFE) that was disabled by a reviewer without (IMHO) cause.  There were no ‘Needs Maintenance’ logs or any issues.  A nearby Cacher, Yeti-at-Large, went out and tidied up the site, but we couldn’t get this oldie (Sept 2002) reactivated.  The Reviewer said the owner had to, but, no matter how we tried to contact him, the owner wasn’t answer.  As a Christmas miracle, a reviewer went in and reactivated it (and then quietly deleted his log so only those of us on the watchlist saw his message).  Since we were in Ontario, our group decided we needed to go out to claim this in case history repeated itself. 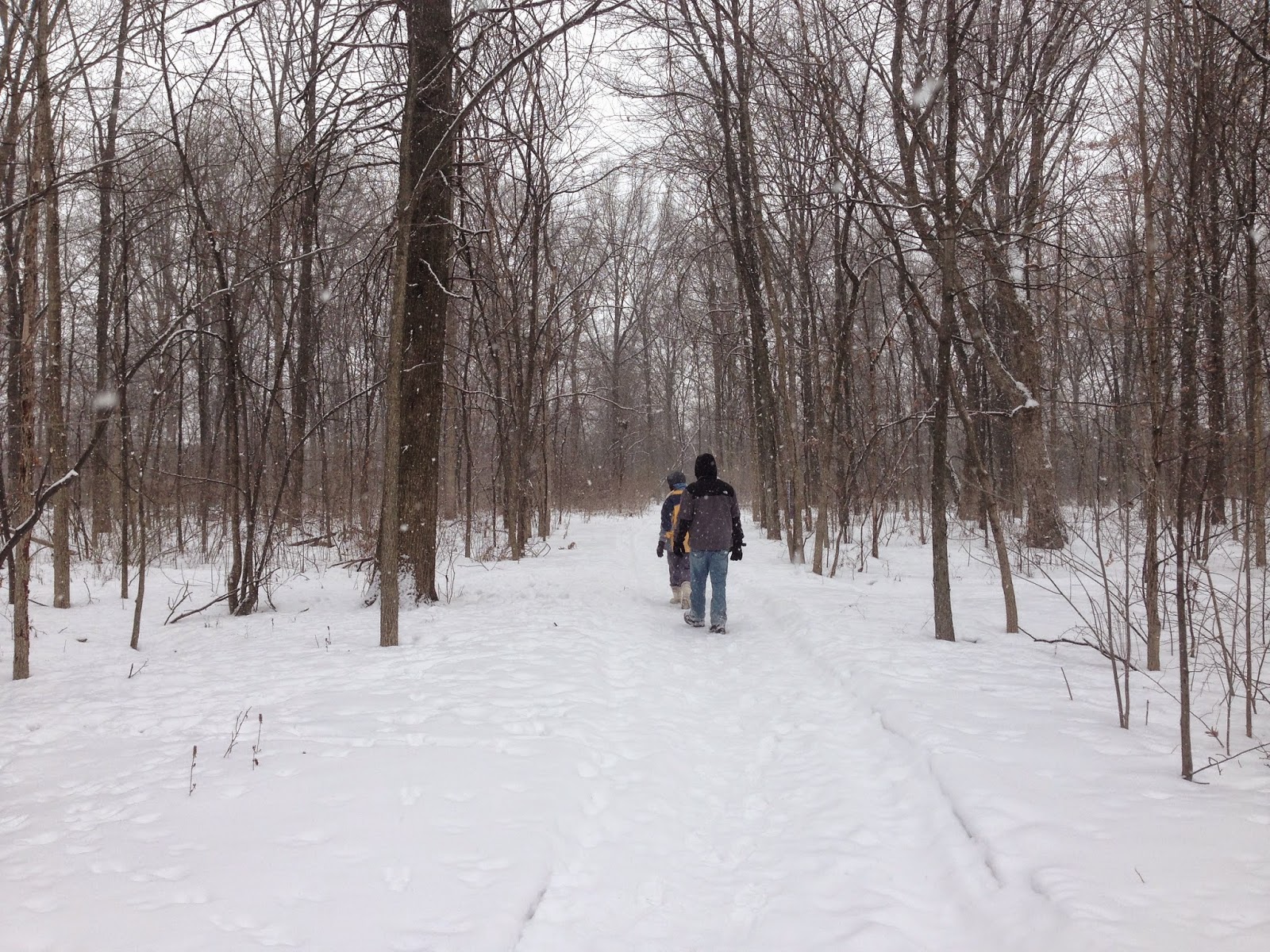 Beautiful walk on the snowy path.  Fun stepping off the trail and into knee-deep fluffy snow.  I was the first to point it out with Gates doing the honors.  I felt safe enough to drop 3 geocoins to continue their journey.  We attempted another in the same park, but to no avail.  The snow was just too high.

After dropping off Gates and Alona (we will see them later in Michigan at the Belated Mardi Gras event GC5KR8Y), Eric and I headed west.


We visited a neat salt mine (Windsor’s Halite GC11YCJ) on the Detroit River, and then headed down to the Ambassador Bridge.


I was excited to see the ice-locked river and the snow-packed park while Eric grabbed some caches I already had.

Stunning, isn’t it?  Yet the sun kept sneaking behind the clouds and the cold was sinking into our bones.  Time to head back across the border for tonight’s adventure.