Saturday was day 3 of the trip and definitely not as expected. We threw the playbook out the window (or it may've been knocked out of our hands by that wayward construction barrel).  More a little later on that... just know that, although I'm sharing a plethora of Virtuals, there are no spoilers in the following images.

Waking, we were hot and sticky.  I lived in North Caroline many years ago, but I've been away too long to be used to it.  TaGeez and I decided to stop at some local Virtuals, hoping the shade would help.  First stop was another "forgotten cemetery" - this one with Revolutionary War heroes.  It was accessed by driving through a residential area, and the graves were quite different than we'd seen to date.

Already behind schedule, we knew we'd have to cut half the Atlanta Virtuals off our list, but we decided, since this next one was on the way to make a stop.  Notice anything familiar?

Funny story about this one. We were paying close attention to state laws about windshield-mounted GPS units - most of the states didn't allow them.  So, our Nuvi was off the windshield and down near the gear shift.  Instead of "blocking our view", we spent quite a bit of time driving and looking down (How safe is that?!?).  As we pulled up to this GZ, we were looking down, trying to see where it was leading us. BEAUTIFUL residential area with enormous houses - we watched as some maids were being dropped off at the servant's gate.  As we pulled up to the coordinates, we looked up and were confused. As we hadn't looked at the cache's pictures, we didn't know what we were looking for.  It wasn't until we turned around and decided to leave that this beauty loomed across the street from us.  We had driven right past it. How'd we miss it?
The next fabulous stop has (currently) 351 favorite points!  I probably would've been more inclined to favorite it if reaching it wasn't such a nightmare.  It's in underground drop-off at one of the largest International airports in the country!  For people who drove from Detroit to see it, we sure spent a lot of time in the airport!  As a bonus, however, we grabbed another nearby Virtual that served as the final qualifier for a really tough Challenge up here in Michigan!


While in the South, I wanted to introduce TaGeez to some of the Southern favorite spots.  I think he was more enamored by Chick-fil-A's advertisements then he was the food.  It's blurry, but this was a water tower we passed on the way from the airport.  What a hoot!


Again, we had to cut many Virtuals off our list, but we did stop for the ones with the highest points. This one was more impressive via Google Earth than in actuality.  Nope, this is not a ball field.  It is the parking lot (of a former ball field near where the current Atlanta Braves play).  Wanna guess which "Aaron" they are talking about?

And right next door was one of the Olympic venues.

Passing through Atlanta, this next stop was our main goal. Oakland Cemetery is considered one of the 10 most beautiful and interesting cemeteries in the United States.  I could write several blog posts on the remarkable sites within these walls.  The photos do not do it justice as the sun was too bright to really focus.


Oakland Cemetery is the oldest cemetery, as well as one of the largest green spaces, in Atlanta, Georgia, U.S. Founded as "Atlanta Cemetery" in 1850 on six acres of land southeast of the city, it was renamed in 1872 to reflect the large number of oak and magnolia trees growing in the area. By that time, the city had grown and the cemetery had enlarged correspondingly to the current 48 acres. Since then, Atlanta has continued to expand, so that the cemetery is now located in the center of the city. Oakland is an excellent example of a Victorian-style cemetery, and reflects the "garden cemetery" movement started and exemplified by Mount Auburn Cemetery in Massachusetts. [Source: Wikipedia)


The first thing many people notice when entering the gates of Oakland is the mausoleum of Jasper Newton Smith, on which sits a striking life-size statue of Smith himself. Jasper Smith was a real estate investor who financed two buildings downtown.... Smith was well known for refusing to wear a necktie due to a bad experience as a child. Therefore, one story describing the creation of his statue notes that when the artist sculpted him wearing a cravat, Smith refused to pay until the offending item had been chiseled off.


As we wondered away from Smith's grave, we passed rows and rows of Victorian angels, walled family plots, and enormous landscaped displays of funerary artistry.  As we headed amidst the throng (there were SO many people perambulating about) back to the brick-paved road, I noticed this little headstone and plaque off behind a bush.  It turned out to be one of the most fascinating markers I've ever seen.


In memory of James Nissen Died Sept. 22nd 1850
Legend states that Dr. Nissen, the cemetery's first internment,
was fearful of being buried alive; therefore, he requested
his jugular vein be severed prior to burial. 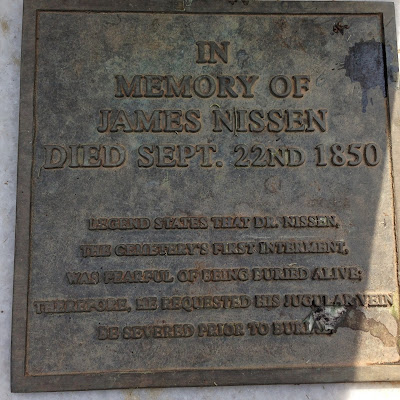 Again, the pictures do not do this place justice.  I've always been fascinated by Detroit's Golden Era "garden cemeteries", but the various sections of Oakland were breathtaking. To date I've visited Cleveland's Lakeview Cemetery, colonial cemeteries in the Boston-area, Civil War-era cemeteries along the Outer Banks, and Wild West cemeteries on the sides of mountains in Colorado. This was another unique experience. 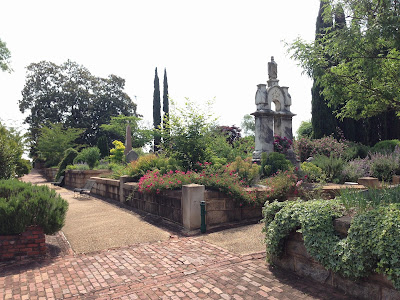 I loved the care that visitors today focused on the family plots.  Each row seemed to be bustling with people planting and others strolling.  There were Segway tours, walking tours, self-paced audio tours. 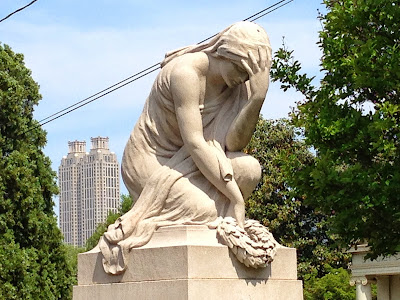 The cemetery is broken up into zones.  The original 6 acres is prime real estate.  We visited the mausoleums near the Visitor Center, the Jewish section, the Confederate section, the Black section and Potter's field. Interesting to see all the granite masterpieces everywhere except in the Black section and Potter's field - these were more like parks than final resting places. It wasn't until afterwards where I read that these sections did have headstones once upon a time, but they were made of wood and have since deteriorated. 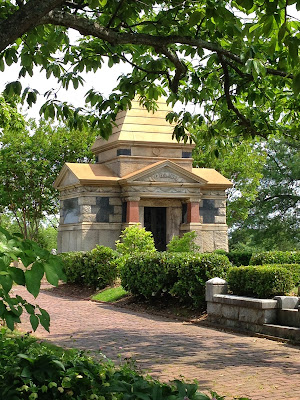 Another amazing feature of this garden cemetery were the Magnolia trees.  They were all over the Confederate section - big waxy leaves and beautiful blossoms.  Stunning and fragrant! The blossoms were as large as my head and many of them just out of reach.  It looked like God decided to dab white paint blotches all over these deep-green towering trees. 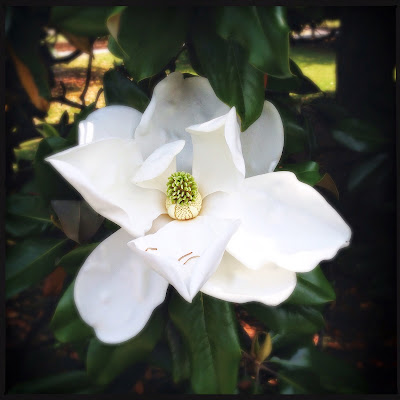 We finally found one low enough to snap a picture.  TaGeez snapped the one below.  Pretty amazing for a cell phone camera.

If Nissen's is my favorite plaque, then the Confederate Lion is my favorite memorial.  Isn't he beautiful?  He's featured in the middle of the Confederate section in the shadow of a very tall obelisk (built of granite from Stone Mountain, the Obelisk, for many decades, was the tallest man-made object in Atlanta). He was a very big tourist draw, protecting the memory of several thousand unknown Confederate soldiers buried in Oakland.

Heading back to the front gate, we veered to the grave of golfer Bobby Jones.  His plot is unique - there's only one headstone.  The rest of the plot is a putting green with a tee and a golf hole.  It is bad luck to accidentally knock the golf ball off the tee so we were very careful.

This time dwindling and the humidity rising, we made a few more stops in the mausoleum section before heading out. 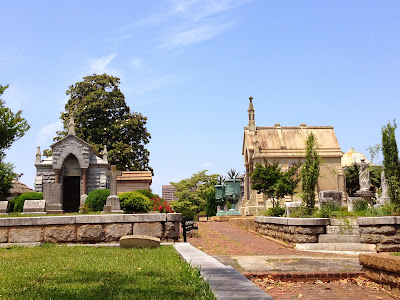 And that was Atlanta.  Leaving later than we hoped, we turned our car towards Augusta, South Carolina and our next targeted JASMER cache.  But things didn't go quite as planned.

The highway between Atlanta and Augusta was beautiful. Well-maintained roads, lined with very lush, very verdant greenery.  Very tall, thin but lush trees. Peaceful. Until we reached the 41 miles of construction. Then the wayward construction barrel that attacked our car causing a flat tire in the middle of... where?  Oh, driving back to Conyers we found a very helpful Pep Boys.  Southern courtesy.. they felt guilty charging us $10 for a new tire valve and sending us on our way. Just $10 and several hours of our time!

Now many hours behind, we returned to the road, hoping to make the Modoc Stash before dark.  Modoc is located in the Sumter National Forest - not somewhere you might want to take a 2 mile trek, in the dark, with no cell service. But we were on the road, right?  Again, no easy sailing here.  We still had a major road closure, an inconvenient detour, and a tailgating Sheriff's car to contend with!

At 7:02pm, we pulled into (after driving right past) the parking for Sumter National Forest.  This was the second most important cache on our trip - a JASMER qualifier for December 2000.  If we didn't get this one, the next closest to home is near Boston.

After changing into hiking gear, packing extra batteries, waypointing the car, and turning the Tracks feature on the 3 GPSr units, we headed off into the woods.  Thankfully, after messaging several previous finders, we knew not to bushwhack and stay on the snakelike path. The direct route meant climbing over mini-mountains with the threat of ticks and Copperheads in wait. 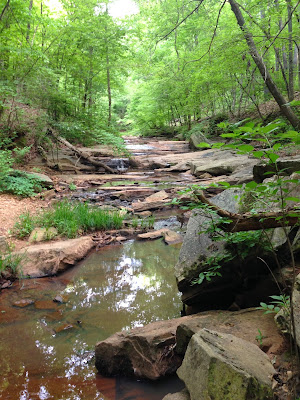 After one mile of brisk hiking along paths hugging several small mountains and meandering over 3 river crossings, we had it in hand!  Modoc Stash GCF4! I believe the birds were doing their best rendition of the Indiana Jones theme song in our honor!

We signed the log, dropped some Michigan path tags plus my NCEES trackable, and posed for pictures. Putting everything back, the hike back to the car was with lighter foot and soaring heart.  Corny, but true. We made it back by 8:32pm and, within minutes, the sun went down and we were driving in pitch darkness. You've never experienced darkness like a rural road in a Southern national forest under a starless sky.

With all the travel delays earlier in the day, we knew we'd have to bypass Columbia on this trip. But we did stop for a large travel bug hotel on the way to Charlotte.  It seemed odd finding a "hotel" behind an "adult entertainment shop" next to a trucker's stop off the freeway. But the duck was worth it. Finding it was easy - opening it was another puzzle, especially as exhausted as we were.

We reached Charlotte after midnight.  My Hotels.com review of the Hyatt Place Charlotte/Arrowhead hotel is titled "Definitely worth more than we paid for". The best (non-expense account) hotel we've ever stayed in. A deserved end to several exhausting but rewarding red-letter days.

Next: Heading home while enjoying the wonders of Roadside America.