TaGeez and I were getting restless.  With half a year practically over and some events on our horizon that may clip our wings, we needed to get out.  Where do you go on a long weekend?  Why..... 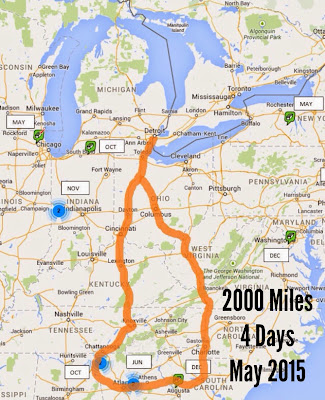 Along the way we grabbed eight virtual souvenirs.  Pretty, eh? 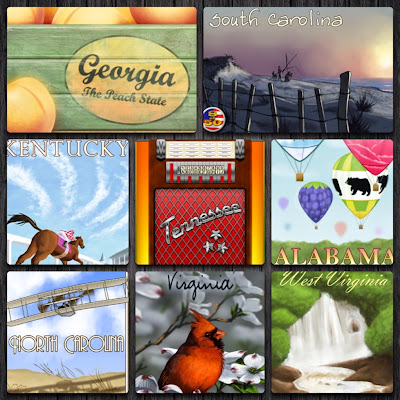 When asked, we admitted we did this roadtrip for two special JASMER caches: Beaver Cache (the beavers have moved on) GC1D June 2000 and Modoc Stash GCF4 December 2000.  Because what would be cooler than finishing off your JASMER grid on the 15th Anniversary of Geocaching? Two more down and just two more to go! And the last two?  Well, they're practically in our backyard! 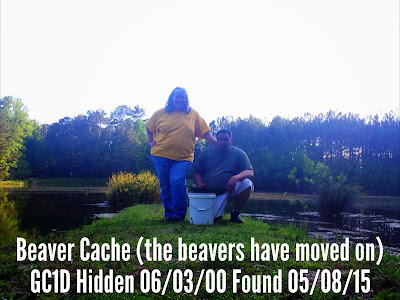 This cache was the biggie, and I had been watching it for weeks.  In a residential area, the hardest part of this find was dealing with the rush hour traffic along the way.  The owner had parking requirements and, following the fence around the tennis court, you reach a pretty little pond and the cache (about 300 feet from parking). The container above is housed in a larger, white container, and it floats during a rainstorm.  No beavers but plenty of mosquitoes at dusk. 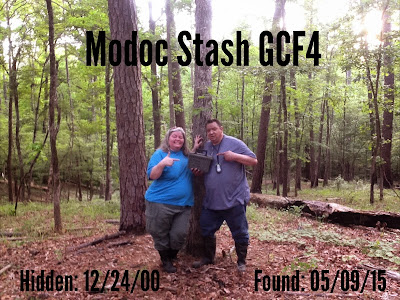 This one had us worried.  Unlike the other oldie, this one was a trek, and we were running out of time.  Modoc Stash is located in Sumter National Forest just across the western border of South Carolina. We were delayed by interesting Atlanta Virtuals, 41 miles of construction, an attack by a construction barrel, a flat tire near Conyers, a closed highway in Appleton, and a tailgating Sheriff near the border.

We arrived at dusk (taking all proper precautions - we were both Scouts) and set off quickly. It's "only a mile walk out there" but it involved hiking trails hugging the sides of small mountains and hills, snake-like switchbacks and 3 river crossings each way!  Even that late at night, the temperature was in the 80's and the humidity felt like a wet blanket.  But we did it! It's this type of cache that reinforces why we do this crazy obsession - all that was missing was the Indiana Jones theme music!

Thank you to all the prior finders who warned us to stay on the trail.  There's no way bushwhacking would've cut down the time. We returned to the parking lot at 8:32 pm, and, within 15 minutes, the sun was gone and we were heading to North Carolina in pitch darkness.

Over the next several posts I'll share the amazing Virtuals, webcams, and special caches that also crossed our paths!
Posted by Elisa (AKA scrapcat) at 11:03 AM