As I told my family, this was more of a driving adventure than a geocaching road trip.  Yes, we did a TON of geocaching and managed to pickup at least 3 caches in every state we crossed paths with, but we stopped to smell the roses, too.  Nothing more fascinating than scenic mountain views and roadside America!

As we took I-75 down, we elected to return via I-77.  It was hundreds of miles of roads and mountains. 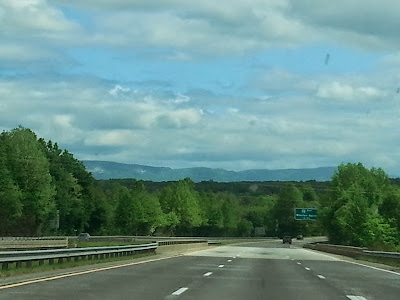 Ok, we couldn't pass it up.  In upper North Carolina is the grave site of the original Siamese twins, Chang and Eng.

The cache page gave a fascinating history of their arrival to the region, their marriage and 21 kids (their descendants number in the 1,500's!), the shocking demise and burial.  They have an amazing mountain view from their final resting place. 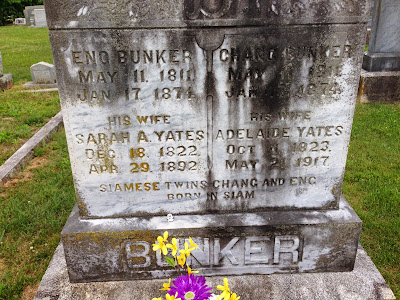 And just a few miles up the road is another site of historical significance.... do you recognize it? 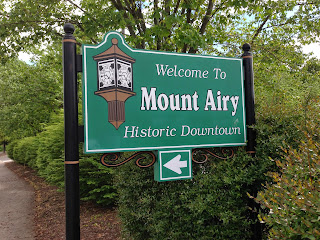 As a military wife passing the highway signs for Mount Airy (Mayberry, RFD), I always wanted to stop, but there was never time.  TaGeez was more than game to pull of and explore the little town.

Unfortunately, it was Sunday and EVERYTHING is closed except the packed churches nearby.  We strolled through town, grabbed a few caches and visited the historic replicas of Mayberry's garage, county courthouse and Floyd's barber shop. 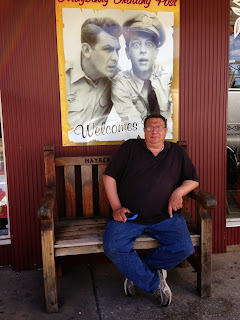 I have to say this is one of my favorite pictures of us EVER.  Taken at the Virginia rest stop, Virginia really is for lovers! 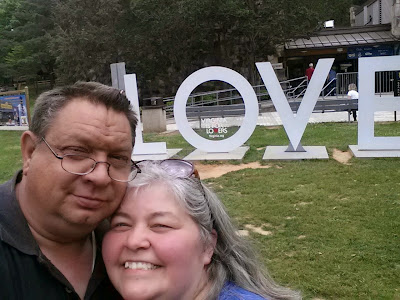 Have you ever noticed this from the freeway?  This is the Shot Tower of Jackson Ferry.  Now that it's been pointed out to me, it's very noticeable from the highway.  It was used to make lead shot in the 1800's, and it has several very interesting signs out front explaining the history and manufacturing process.

What I found more interesting was the view from the hill.  Beautiful! 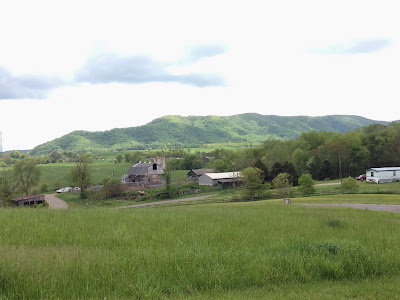 Well, we did stop for a cache so we pulled off to grab it.  It was the first time we found one literally in the mountain! 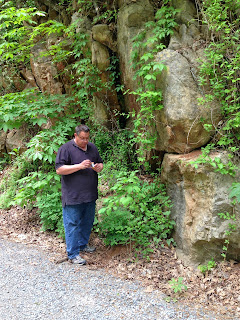 Wildflowers lined the highway from Charlotte through Columbus.  This had special meaning to me as I was driving along the mid-Atlantic roadways.

This leg of the journey was on Sunday - Mother's Day.  And 22 years ago this very week, I was also driving these exact roads from Carolina to home.  My mother had passed, and I was going to see her for the very last time.  Every time I remember that trip two decades ago I recall how sunny the day was (unfathomable blue skies) and the hundreds of miles of wildflowers in the median.  Who would've thought all these years later, during this same week, on Mother's Day, I would be on these exact roads, heading in the same direction? Blue skies.  Wildflowers.

Still feeling the effects of my trip down memory lane and witnessing a 3-car fatal accident on I-77, we decided to stop at another highly-favorited cache for some fresh air. This is (as the sign professes) the smallest church in Wythesville and one of the smallest in the country.  The inside contained 3 pews and nothing else.

At first, we were confused.  The coordinates took us towards the back corner, but there were only rocks. What's the big deal?  After a moment's contemplation, the realization hit home.  The cache container was not outside the church, it WAS the church!

With caution, we opened the door and stepped in.  And there was the log! 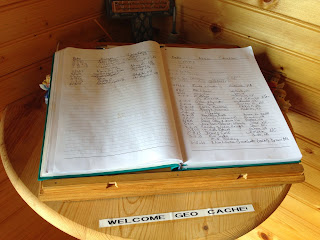 I wish we had more time to explore all the other novelties along the roadway, but time was drawing short. We had several must-see stops still, so we made some miles on the highway.  I had totally forgotten that you must drive through (not one but two) mountains along this route!  Too cool! 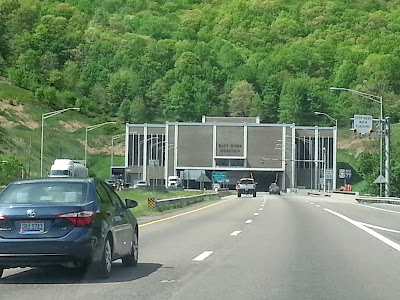 Leaving Virginia, we arrived in West Virginia around dinner time.  Although it had been my hope to spend more time in the state capital, reaching home by midnight was our priority. TaGeez humored me, so we grabbed this special cache in Charleston.  Regretfully, we had to skip the webcam as the cache page absolutely forbade visiting the campus on the weekends.

After Charleston, our route took a new path towards Hocking Hills, OH.  After crossing a rather impressive aqua-colored bridge, we finally had our first rain of the trip.  Weirdest 5-minute deluge I've ever experienced because there was not a cloud around and the sky was vivid blue.  We were rewarded with a double rainbow for our troubles.

The drive from the Hocking Hills area to Columbus was probably the least thrilling of the trip (construction, tiny towns, rural amenities), but we had one more stop on our agenda.  The Columbus webcam on the OSU campus was the only functioning webcam on the entire trip!  And we even took a pretty impressive picture in the dark!

We arrived home around 1 a.m.  Exhausted.  Exhilarated.  And already plotting our next adventure.

Sometimes it CAN be about the numbers, but it also helps if it's about the experiences, too.
Posted by Elisa (AKA scrapcat) at 12:34 PM